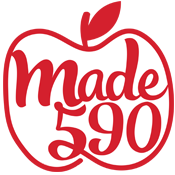 Made590: Locally Made, Size Inclusive Clothing 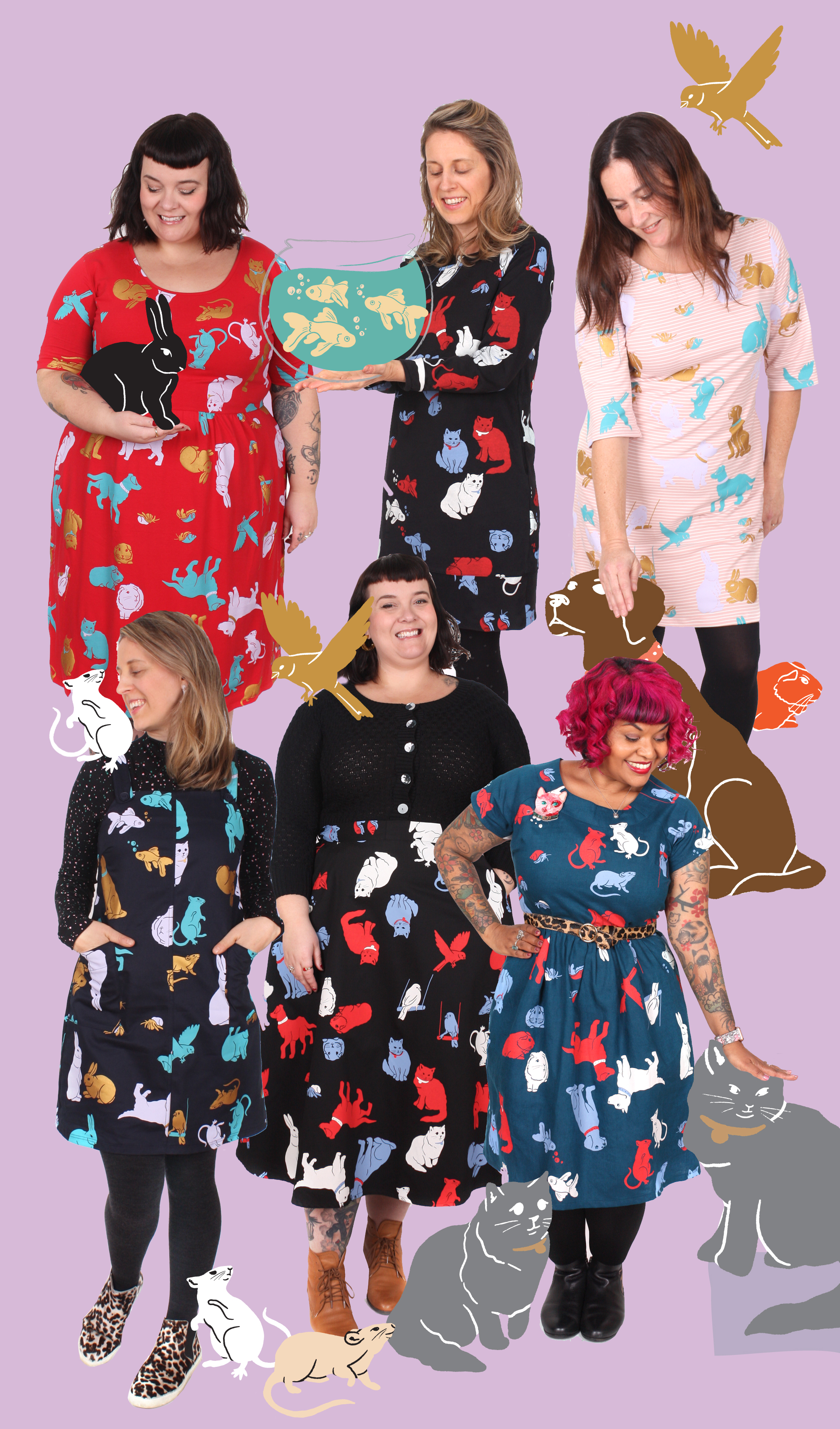 We have a new print on the block here at Made590 and she’s a cutie. As a lot of you may know, all of us who work here at Made590 are very much in love with our furry, feathery and fluffy family members!
This print is a bit more of a nostalgic print as it pays homepage to the most common childhood pets that we have all loved and grown up with. It was inspired by a beloved fifties novelty print skirt in Kell’s collection featuring groups of puppies.

We realised that between us all here at made590 we’ve owned and loved every single animal featured on this print which ranges from: Cats, Dogs, Birds, Hermit Crabs, Bunnies, Goldfish and Mice. Here’s a few behind the scenes pics of the making of ‘Pets Paradise’, some sneaky pics of the colour palettes we’ve used and the the pets in action getting printed up. This print was brought to life and illustrated by Kirbee Lawler and printed by: Publisher Textiles.

the making of Pet’s Paradise

meet our made590 animals

In honour of our furry, fluffy and feathery friends, we wanted to dedicate this post to our beloved pets; passed and present. And share with you some of their quirky habits, their rescue stories and the joy they bring into our days.

Indi was our first baby and the absolute best dog anyone could ever ask for. We got Indi from a Bankstown rescue as Indi was left on the side of the road after a very traumatic 12 weeks of her life. Indi was a constant fixture in the Made590 shop and as a puppy used to sleep under the clothing racks. Indigo welcomed her 2 human brothers over the years but was always thought of herself as the first born. She had the most beautiful nature and was loved by anyone who met her. A week before Peggy was born Indi very suddenly passed away, she is still so very missed. When Peggy was 6 months old we realised how much our home was missing without a doggy around and it was really important for Paul and I for the kids to have a pet. Tessa popped up on my FB feed with Wally’s dog rescue and I couldn’t stop looking at her!

She was 18 months old and didn’t have as traumatic start to her life as what Indi did but her owner no longer wanted her. We thought getting a slightly older dog it would be easier to have with a baby in the house and how we were wrong! Tess came to us completely untrained so pretty much a puppy nature in a huge dog body! She is a shepherd X smooth collie and has required A LOT of training from Paul but she has the most wonderful personality and is amazing with the kids. In fact she is just like having another baby! Tess is extremely protective of her people and as long as she is with someone she is a happy girl…. We always said after Indi we wouldn’t get another dog who shed so much….. We now vacuum daily with Tess but she is worth it!

Wilfy is an 8 year old rescue pup who came to live with us after a friend was fostering him for the RSPCA. He came from puppy farm originally and because of that he takes time to trust strangers and new people. He is also petrified of kids! His favourite things are the beach, toys, human food, and hogging the bed. He also has a fondness for his sister Juno because he gets to steal her carrots in the morning so he sometimes lets her share the crunchy bits of his porridge.

Juno is my 12 year old bunny who has been my life long muse and reason I started my brand The Storybook Rabbit. She is sassy, demanding and loves pats on the head. At her age she is now blind and considered very elderly so doesn’t do much except eat and lay around on her tiny electric blanket for most of the day. She only shows interest when offered banana, dates or a selection of fresh herbs. She also loves her brother Wilfred because he protects her and makes sure everyone knows if there is danger around.

This is Primrose – she’s a Rex rabbit and I rescued her in November last year. She’s the most beautiful natured little soul-and is the perfect little sidekick.
Her favourite treats are blueberries and banana and she eats Kale like there’s no tomorrow. She is more like a dog than a rabbit and knows just how to put a smile on my face when I need it. She’s the best

We officially adopted Putty 8 years ago, actually she adopted us. She used to visit us in our apartment window sill each day, we figured she must have lived close by in one of the lane ways – but she didn’t have a name tag. One day she walked straight into our lounge room whilst we were watching a movie – it was so funny, it was like she was inspecting whether this would be a good home for her and if we would be adequate parents she could put up with. She was so sweet and dainty, but had attitude too – and of course, I fell in love with her straight away. I’d only ever had one kitten when I was about 3 yrs old who passed in a tragic way – but Oli (my hubby) and I both grew up with animals, so to not have had one together in our 6 year relationship at that point was sad! I gave her milk one day and the rest was history, she officially adopted us – yay, we passed the parent test! Six months later she hurt her little paw jumping fences in our backyard, and we took her to the vet immediately.

We found out she was micro-chipped and that she actually had a home – we had her for 6 months at that point and my heart was broken at the prospect of having to give her back. When her original owners were contacted to say their cat was injured, they denied ever having her – the local ranger visited them and found out that Putty had originally lived in a house with LOADS of cats where she must have been neglected. She was one of the smallest of the cat crew so was being bullied and had to fight for her food. She was held for over a week at the vets, we got her paw all treated up and the papers were officially signed over to us as her human parents; her original owners denied ever having her! I’ll never forget how happy I was to take her home again with us – her forever home! With a street cat, comes some temperamental beahviour. For years we’ve loved her up and spoilt her rotten – from not being even able to pat her to now picking her up and cuddling her – she’s come along way from the alley cat she was once was!

They are all Cornish Rexes and as quirky as their mama. We all like to wear matching outfits! You can follow the adventures of these three boys at: @liza_and_the_rexes.

Riley is a five year old Keeshond, otherwise known as a dutch barge dog. They’re also known as the velcro dog – because they stick to you and follow you everywhere you go. I like to refer to her as a living cloud. She’s extremely affectionate and loves both humans and animals. She brings so much to joy other people’s lives, and always makes people smile at the dog park.

She has kleptomaniac tendencies though, and has even been known to throw her human dad’s shoes over the fence. Cherry is a New Zealand Kākāriki parrot who is 9 years old – she was hand reared and is beautifully tame. Kit Kat is a 7 year old Netherland dwarf, who just seemed to keep growing. He’s a sweet boy, with a side of attitude – his favourite food is kale.

‘This blog post is pretty timely for our family as sadly, 3 weeks ago we lost our gorgeous little lop eared dwarf bunny, Daisy. We had Daisy and her sister Poppy for the last 6 years…2 sweet little pitch black sisters that you couldn’t tell apart as they were so so similar in their markings.
These girls had such a sweet temperament and would put up with the affection that goes with having 4 young children show them love – rides in dolls prams, being lugged around the house in affectionate cuddles or led around the backyard on a bunny leash.

Poppy left us a year or so again suddenly and we really thought that Daisy would miss her so much and wouldn’t last much longer but we were lucky enough to have her for another year and a bit. My mother in law did discover she had found a new friend to keep her company in her hutch – a rat!!
So for now, our family is without a pet while we wait for the next sweet little creature to enter our lives xx

Liberty of London: the whole collection

How do I wear a Valentina Skirt?!

Learn more about our active wear

OUR MOST RECENT NEWS